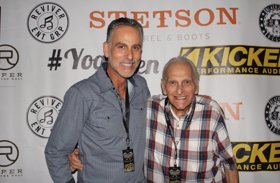 “This was a necessary step for us to take, considering the success and growth that we’ve experienced and celebrated over the last 4 years,” said Reviver Entertainment Group Founder, President and CEO David Ross. “DAVMORECORDS was formed in honor of my father, who taught me the importance of hard work, the need to show loyalty and commitment to others and the value of family. I’ve built the Reviver Entertainment Group within that mold.”

Moe Shulman, the “Mo” in DAVMO, is an industry veteran of 8 decades. He was the head of National Promotion and Marketing at London Records and has worked on campaigns with The Rolling Stones, ZZ Top, Tom Jones, at the label and its subsidiaries. He’s experienced a colorful and varied career in music, having worked in publishing in the Brill Building and spearheading the promotion department at Alpha Distributors in the northeast, and achieving dozens of #1 records for labels like Motown, Arista, and A&M records.