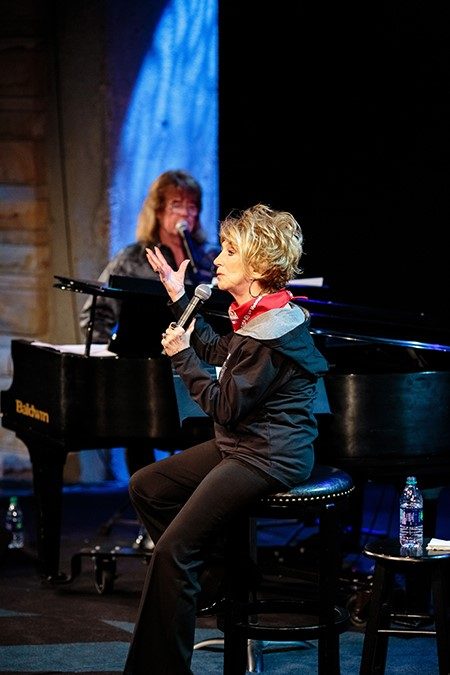 The museum’s Songwriter Sessions are held every Saturday at 11:30 a.m. in the intimate atmosphere of its Ford Theater. During the program, the featured songwriter shares special stories about the compositions they have written through a mix of songs, stories and questions from the audience, followed by a meet and greet. Previous Songwriter Sessions can be viewed here.

“I was apprehensive about doing the songwriter showcase at the Hall of Fame. It is after all, very hallowed ground! But as I sang the songs I had written that were recorded by so many of the artists who are now honored in the Hall, I felt so at ease and truly felt their presence with me,” said Jeannie Seely. “Thank you to all who made this happen, and to all of the wonderful fans and visitors to our city for coming in to share the time with me.”

“For years I performed with Jeannie Seely on the most venerable stage in country music–the Grand Ole Opry; however, to perform alongside Jeannie at the Country Music Hall of Fame was an honor like no other.  To think that ten Country Music Hall of Fame members have recorded her songs is mind boggling,” said Tim Atwood. “Jeannie is one of the best entertainers in our business, but Jeannie is also one of the best wordsmiths I’ve ever known.  This lady can do it all, and I’m just proud to call her my friend.”

About Tim Atwood:
Tim is originally from East Peoria, Illinois. He began his music career playing gospel music at the age of thirteen for The Harris Family. Before settling in at the Grand Ole Opry, Tim toured with country legends Mel Street, Lynn Anderson and Jim Ed Brown where he can still be seen regularly on the rebroadcasts of Jim Ed’s TV series Nashville On The Road. Tim’s other TV credits include Home & Family, Larry’s Country Diner, Another Wednesday Night Prayer Meeting, Opry Live, Nashville Now, Hee Haw, Church Street Station, Country On The Gulf, Pop Goes The Country, Country Connection, Late Night With David Letterman, The Dailey & Vincent Show and features on CBS, NBC and FOX National News.

About the Country Music Hall of Fame and Museum:
The Country Music Hall of Fame® and Museum collects, preserves, and interprets country music and its history for the education and entertainment of diverse audiences. In exhibits, publications, and educational programs, the museum explores the cultural importance and enduring beauty of the art form. The museum is operated by the Country Music Foundation, a not-for-profit 501 (c)(3) educational organization chartered by the state of Tennessee in 1964. The museum is accredited by the American Alliance of Museums, and welcomes over one million patrons each year, placing it among the most visited museums in the U.S. The Country Music Foundation operates Historic RCA Studio B®, Hatch Show Print® poster shop, CMF Records, the Frist Library and Archive, and CMF Press. Museum programs are supported in part by the Metropolitan Nashville Arts Commission and Tennessee Arts Commission More information about the Country Music Hall of Fame® and Museum is available atwww.countrymusichalloffame.org or by calling (615) 416-2001.